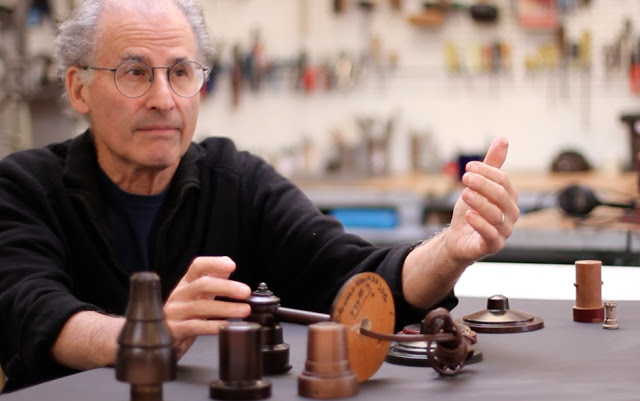 “Art is a way of looking at the world and the Artist has a responsibility to tell a certain kind of truth.” -Howard Newman

Howard Newman is a painter, sculptor and restoration artist born and raised in New York. His is also an incredible conversationalist whose work is about telling stories. His interests are rooted in science and philosophy, language, technology and the mysterious ways in which we operate within this world. Near a lush garden with cats sleeping beside bronze figures, Howard’s studio is in the garage of the home he shares with wife and collaborator, Mary.

He studied Architecture, Cultural Anthropology and Classical Literature at Miami University of Ohio before he received an MFA in Metalsmithing from the Rhode Island School of Design, where he studied with his mentor John Prip. 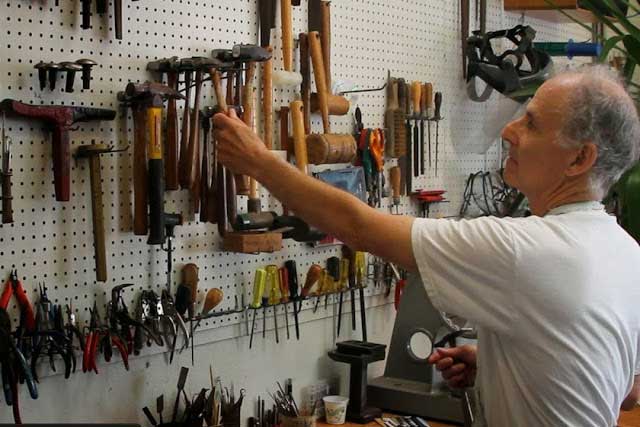 Howard was awarded a Fulbright Scholar Grant in Italy where he and Mary lived in a 15th century farmhouse south of Florence. There he made his first bronze sculptures using foundries all over Tuscany. He returned to Providence where he was soon being collected and shown in galleries, gathering attention from critics and museums.

For the over thirty years he has created bronzes based on his studies in architecture, anthropology, design, and metalsmithing. His fascination with the way things work drive his own personal path of intellectual questioning and finding solutions. 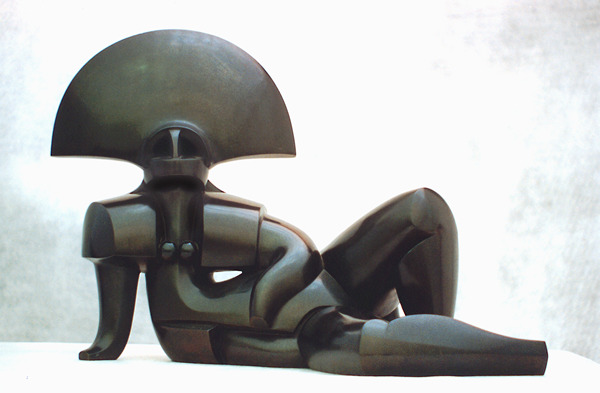 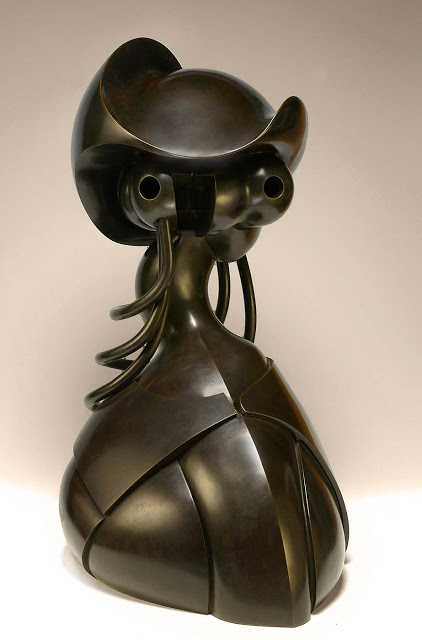 “One of the biggest problems of being an artist, is one has to make a living. At the same time, making that living has to be secondary to being an artist. It’s a balance of understanding the business and the business of making art. If you are going to be an artist, one of the saddest things are the people who do only the business end and sacrifice their essential spirits. So the real question is, How big is your spirit?” -Howard 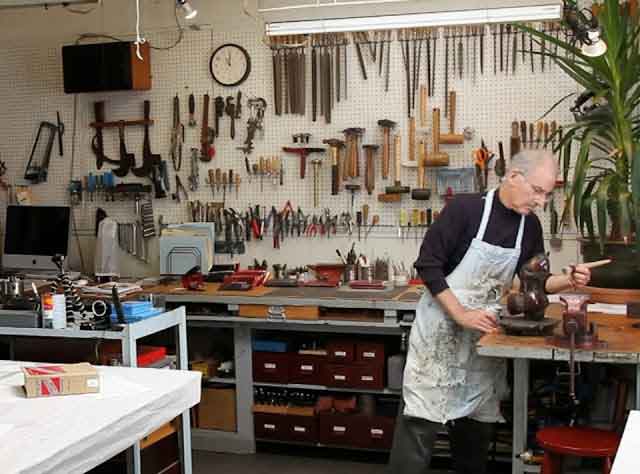 During the 1980s-1990s, Howard taught one class a year in various departments at The Rhode Island School of Design where he encouraged his students to build analytical constructions through critical observation.

“Change is the only constant. Artist has to be good and very adept at changing. If you are very good at changing, then you are set to be an artist.” -Howard 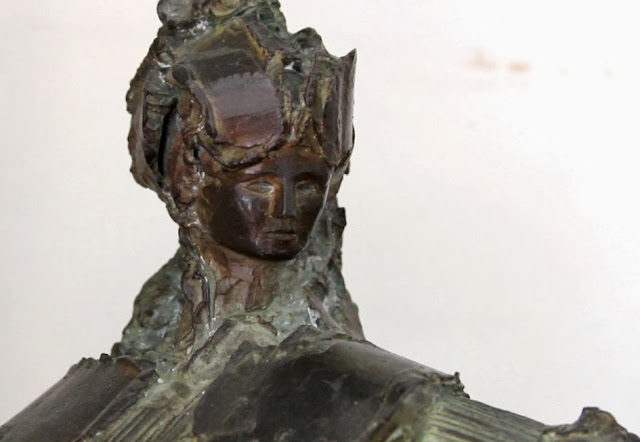 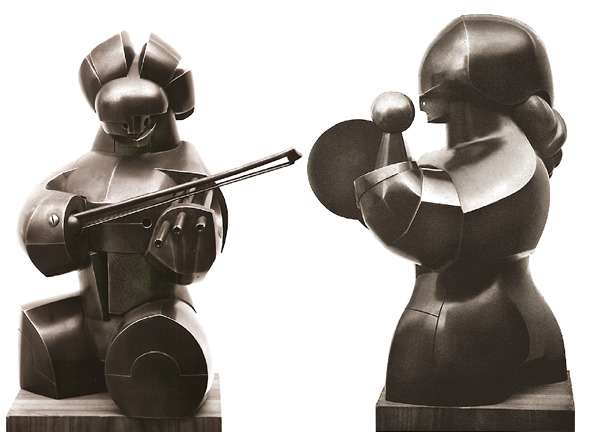 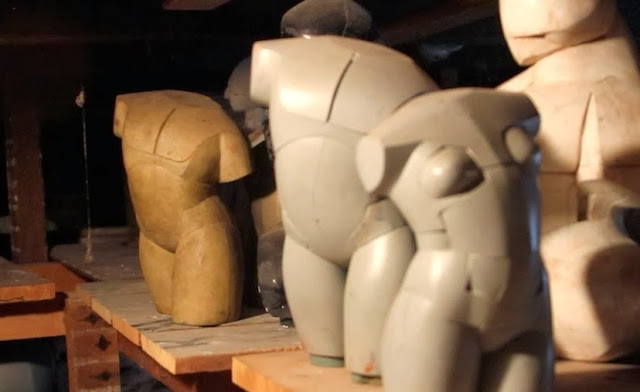 Howard’s work combines elements of human figures and machines into interlocking geometric shapes, ranging from machinelike Futurism to deconstructed human shapes. There is precision along with revealing the marks of original development in clay.

“My sculpture and drawing focused heavily on my love of refinement. But the more expressive vocabulary of wax modeling and my increasing use of color was radically expanding my vocabulary. It was then that I began making paintings.” -Howard 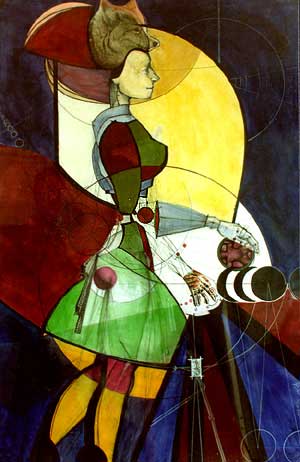 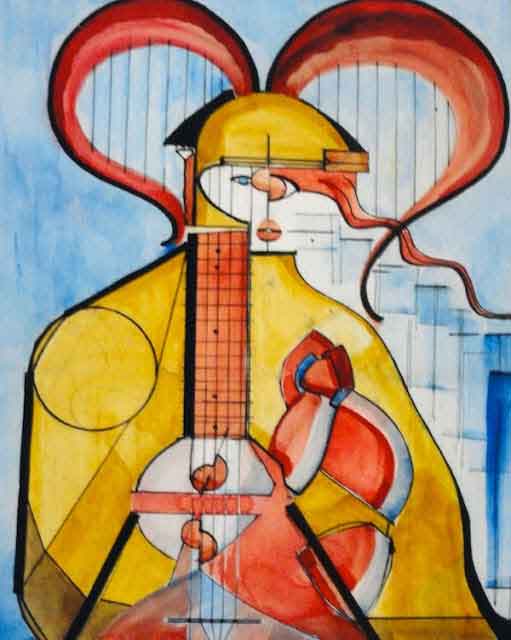 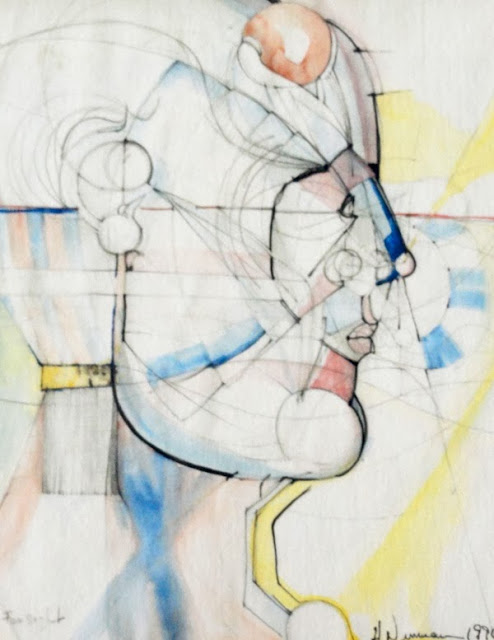 “We came to Rhode Island from living in New York City and doing community organizing in the 1960s. Before that we lived in Laredo, Texas. Going from dusty hot place to the bowels of New York City and over to Rhode Island gives you a unique survey of the way one could choose to live. After living in Italy on a Fullbright, we arrived here in 1976. In Newport the size of the community is parallel to one of Rennaisace Florence and Tuscany.

Some people would find that to be a stretch, but as someone who has studied sociology and anthropology, there is an ideal size to a community. Having an intuitive sense of one’s place in the community is conducive to creativity, to a sense of belonging, to a place to have a family and children. This is an ideal place to live. You have to have a good reason to leave, and Mary and I never found one. -Howard 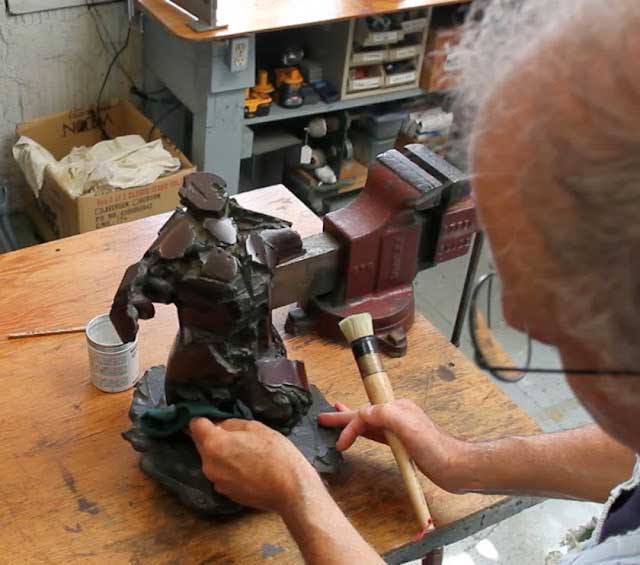 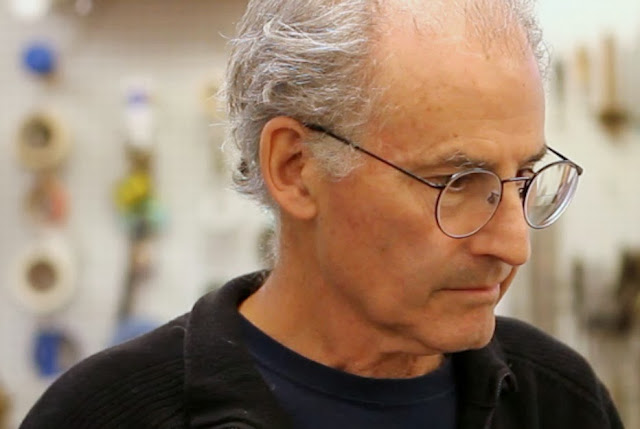 Howard’s work has been exhibited and reviewed both nationally and internationally throughout New York, Chicago, Los Angeles, Rhode Island and Copenhagen.

His drawings, paintings and sculptures have been purchased for the permanent collections of major museums including The Smithsonian Museum of American Art, The Brooklyn Museum, the Newark Museum, and the Fine Arts Museums of San Francisco.

His many solo exhibitions include the Cordier & Ekstrom Gallery, Gimpel & Weitzenhoffer, The Century Association in New York City, Feingarten Galleries in Los Angeles and The Chicago Arts Club. 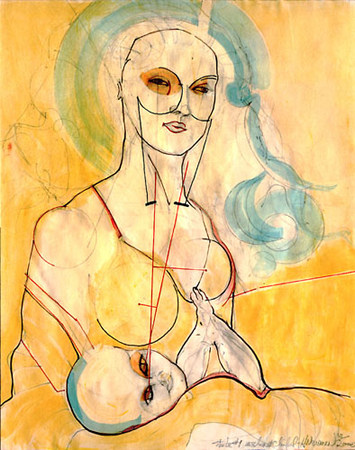 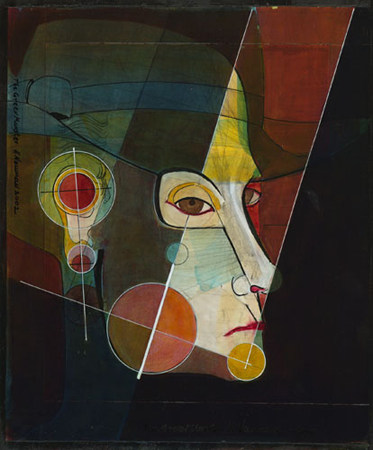 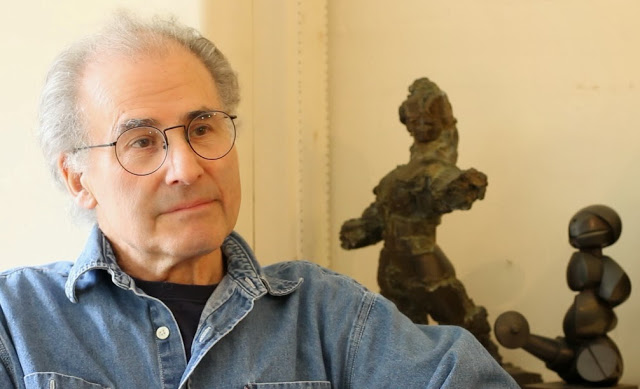 “Living a lifestyle of an artist is that everyday is a surprise. Choosing a life of an artist involves everything about not having security. The whole idea of security is a fiction. I call myself independently unemployed. I need to work for myself. Fundamentally, money alone does not provide security, and to some it does. They think that a lack of crisis is security when it really isn’t.” -Howard 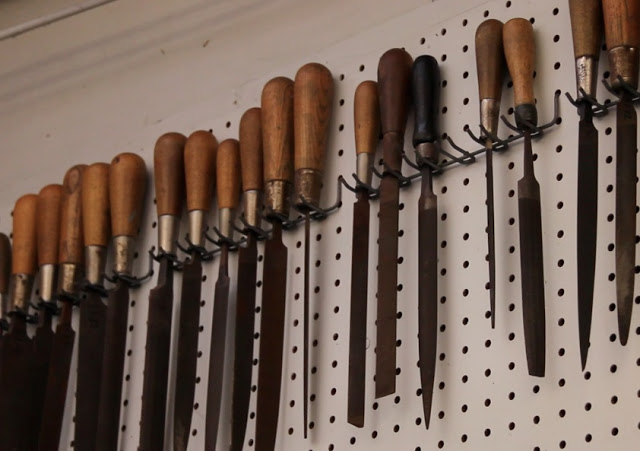 He currently resides in Newport, where his art continues to evolve and his company, Newmans Limited, specializes in the restoration of fine metal art objects, sculpture and a variety of antique mechanisms. Alongside Mary they orchestrate small teams to implement the challenging problems of restoring historical objects ranging from art bronzes, silver hollowware, antique machinery and weapons, antique optical instruments and artifacts from non-western cultures made of glass, wood, bone, and ivory.

No challenge or object is too unusual for them and keeps the job interesting, including the replica of a 17th horse trough in Newport’s Washington Square. 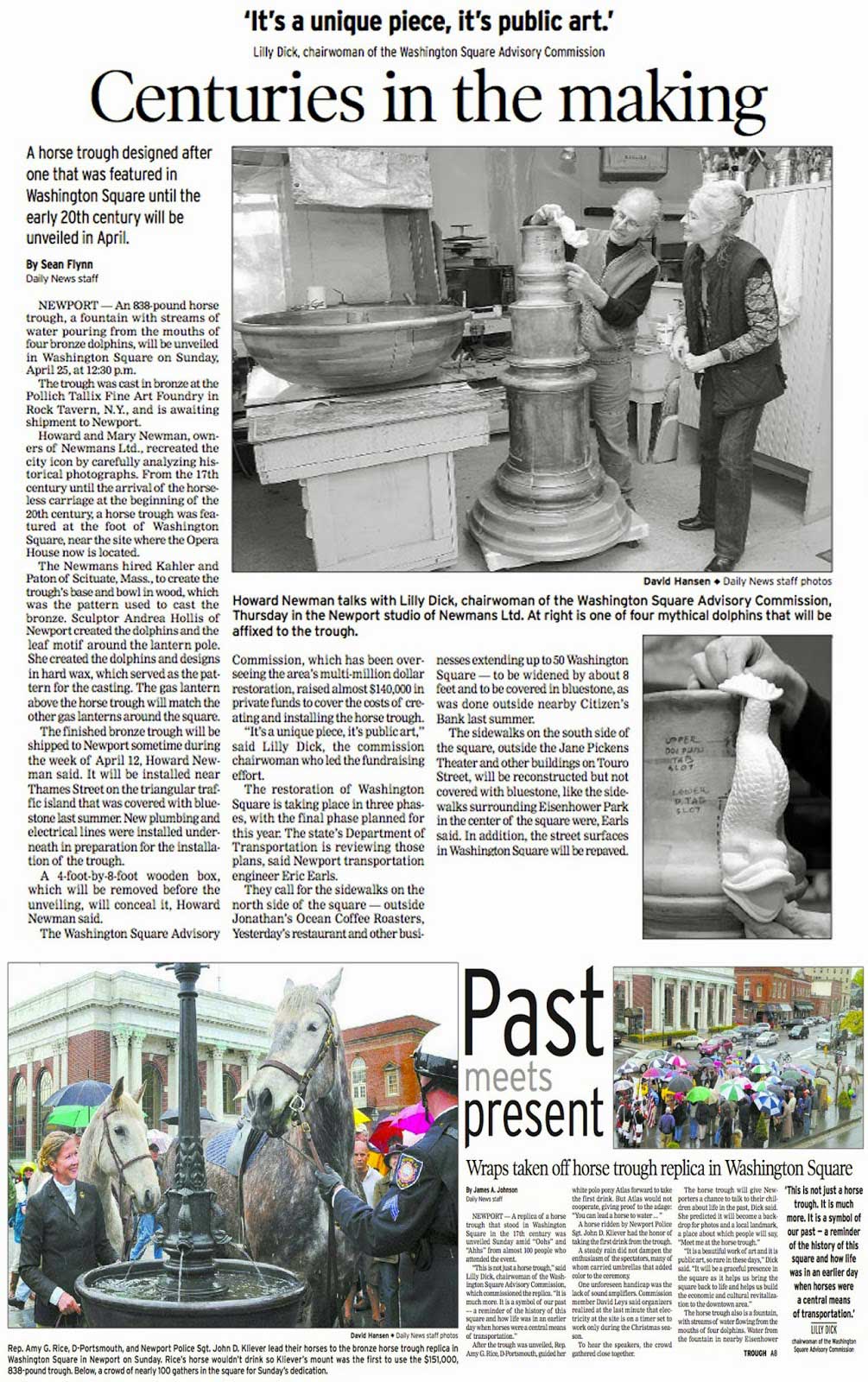 Commissions include the restoration of the Lippold sculpture for the Church of St. Gregory the Great at Portsmouth Abbey, Touro Synagogue in Newport, Brown University, and various public spaces, historical societies and libraries. 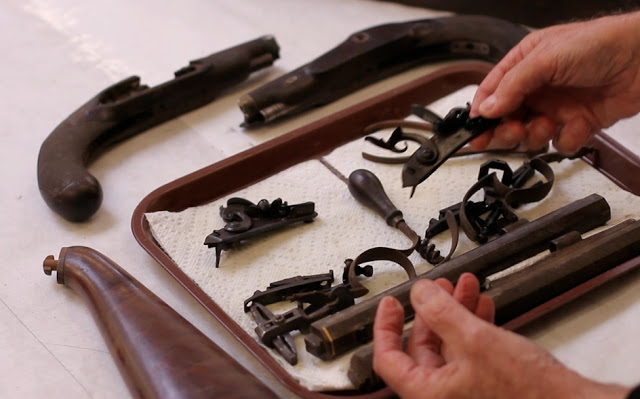 Restoration of a pair of antique dueling pistols. 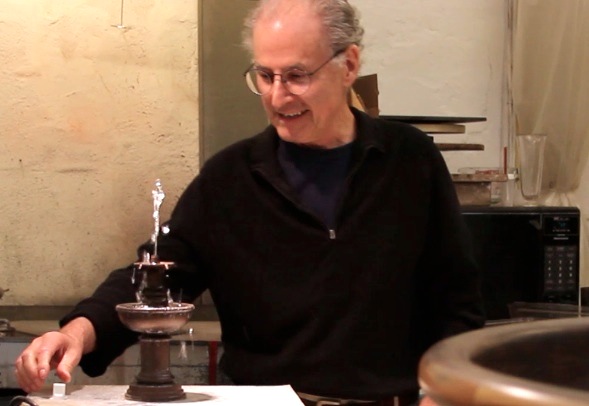 Howard fires up a small-scale replica of a fountain project. 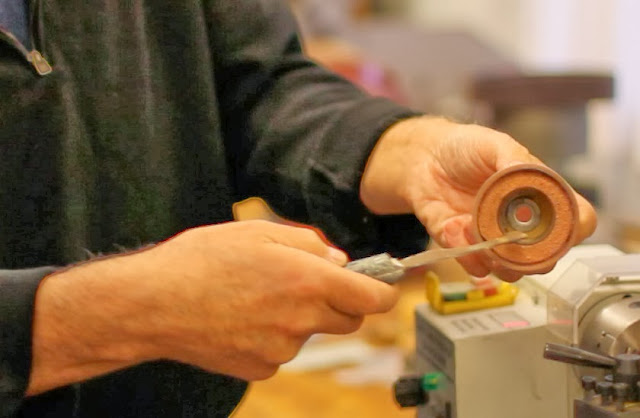 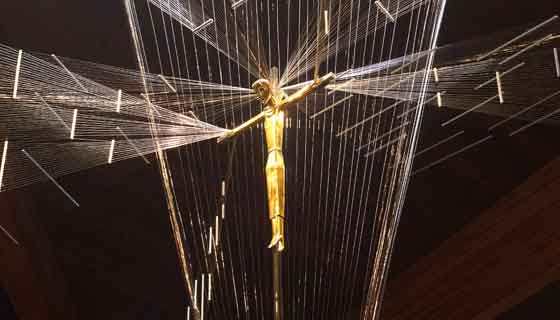 Newmans Ltd. restored the sculpture at the heart of Portsmouth Abbey’s St. Gregory the Great Church.
The Trinity, radiating some 20,000 feet of gold-plated wire out from a central crucified Christ figure, was designed by Richard Lippold, an abstract artist who collaborated with such modern architects as Bauhaus founder Walter Gropius and Philip Johnson. Lippold was known for his geometric constructions using wire as a medium. 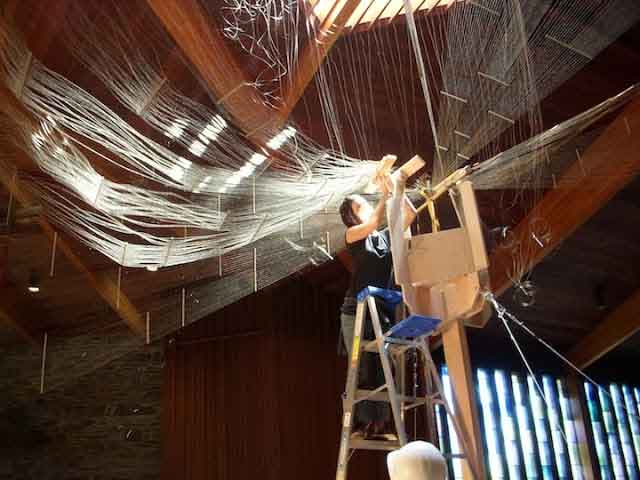 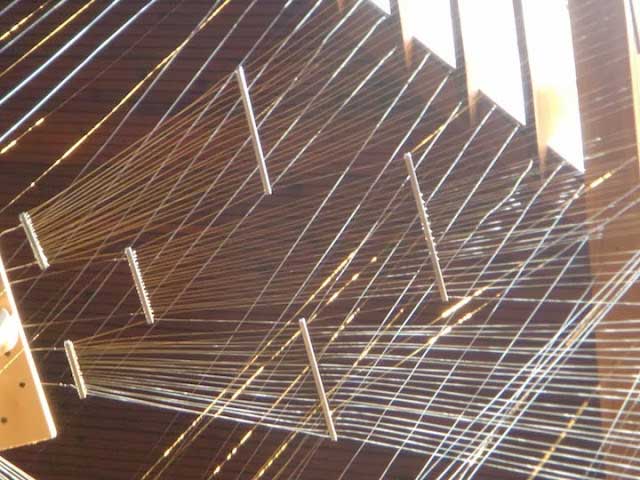 In the last year some of Lippold’s most complicated constructions have undergone nimble-fingered repairs costing hundreds of thousands of dollars. Artisans at Newmans Ltd., a metal-restoration outfit in Newport, R.I., and at the Richard Lippold Foundation, a nonprofit organization in Locust Valley, N.Y., have been clambering around scaffolding to untangle, dismantle, polish and restring sculptures on miles of wire. “Lippold was an engineering genius, but we’ve been dealing with a piece that had reached the threshold of catastrophe,” said Howard Newman, of the Newport company. The Lippold work called “Trinity” is about 215 aluminum bars on four miles of gold wires, spanning from floor to ceiling at a 1960s Benedictine chapel in Portsmouth, R.I. “People’s mouths fall open when they see it going back up, like they’re watching a spider spin a web of blazing gold,” Mr. Newman said. “The more that goes up, the more exquisite it gets.”
–Wired: Preserving the Installations of Richard Lippold, New York Times, 2009 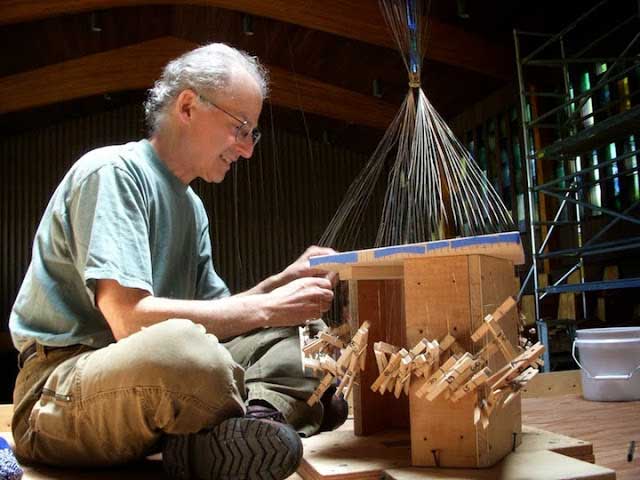 Reinstalling and restoring Lippold’s sculpture was no small feat for Howard and Mary’s team.
“Basically when I look at a problem, I look at its analogies in the world,” says Howard.
“Lippold was an utter genius. The more we got into it, the more we realized it was like taking apart a piece of music by a jazz musician. Every step you took, you saw more of the structure and the liberties he took with it. We probably invented 100 tools in the process of doing this restoration.“
–Traditional Building Magazine: On the restoration of The Church of St. Gregory the Great, 2009 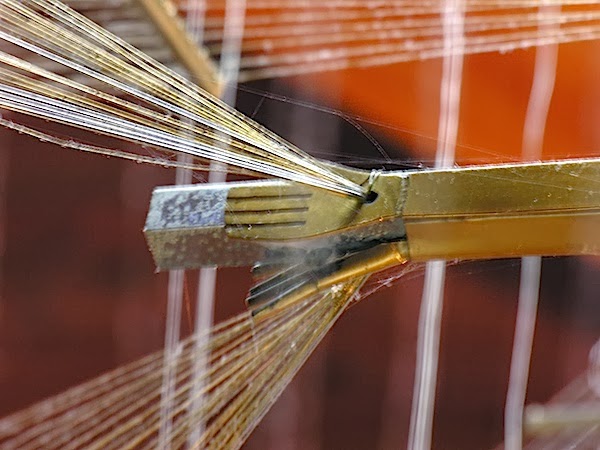 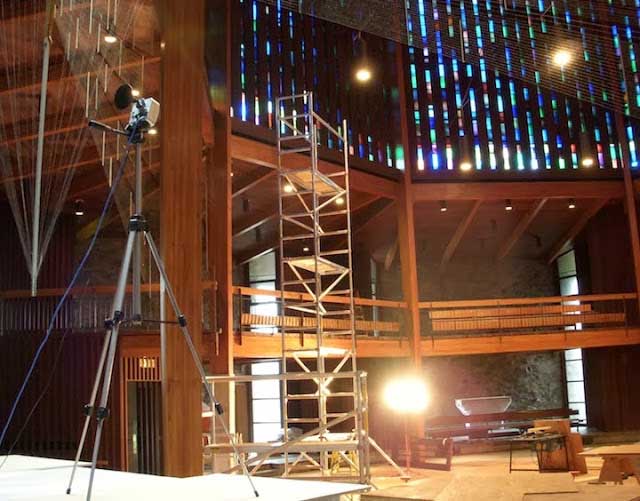 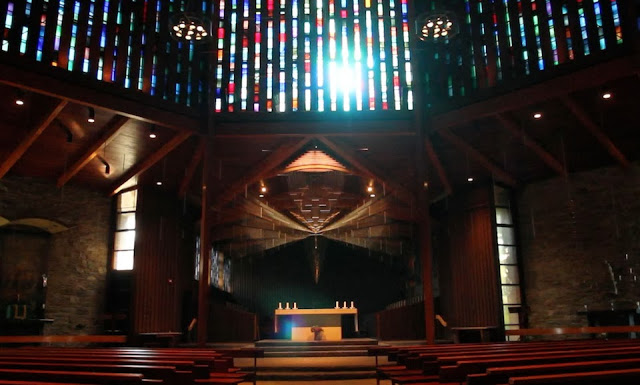 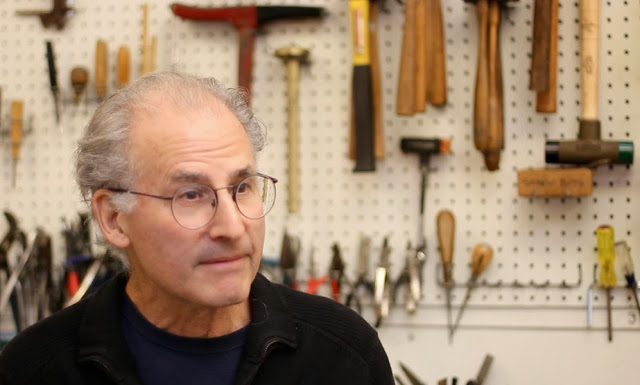 “Every time you do something you get a return.
Every decision is learned from the last decision. An artist is not operating trying to satisfy people from the point of view of fear. Don’t live your life by fear. Ninety percent of the things people are afraid of don’t even exist. And if they do, you don’t have control over them anyways.
Live your life on your own terms, and every time you take a step use that step to take the next.” -Howard
To view Howard Newman’s work and see the restoration projects of Newmans, Ltd. visit http://www.newmansltd.com/

Every new moment of every new day is an opportunity to create one’s life anew. Most moments we force to appear the same as the one before, and mistake their similarity for security. Or, we can choose to live a life of invention, where every moment is a once-in-a-lifetime opportunity.

Howard Newman‘s early training was in Architecture at Miami University of Ohio where, after three years of studying Design, Engineering and Structures, he came to understand the primacy of a liberal arts education. After completing an open project in 1963 for which he designed a self sustaining moon station, and for which he received the department’s highest grade, Howard left the Department of Architecture to study Anthropology and Sociology. In February of his senior year’s first semester final exams he and Mary eloped in a raging snowstorm. That summer he received his BA from Miami. After graduation, Howard and Mary entered Peace Corps training in a Special Forces training camp in Arecibo, Porto Rico, where the two learned fluent Spanish and Survival Training – how to be tied up and survive in deep water, to belay from the top of a two-hundred foot high dam, and to survive in the jungle.

The Newmans remained in the United States and became part of the Federal VISTA program in Laredo, Texas, where they created, with twenty other volunteers, a city-wide system of neighborhood councils that controlled and distributed anti-poverty funds to build streets out of creek beds, and tutor the citizenry in the fundaments of democracy.

While still in VISTA, after turning down a full scholarship to the University of Pittsburg for a Master’s Degree in Community Organization, Howard went to work as a legal aid with Mobilization For Youth in New York City, where he worked to modernize the city’s antiquated welfare system.

But, after three months, he saw that his talents lay elsewhere, and applied to The Rhode Island School of Design, where he became a silversmith under the tutelage of John Prip, known as the Dean of American Silversmiths. After receiving a Bachelor of Fine Arts in Industrial Design, and a Master of Fine Arts in Sculpture, Howard was awarded a Fulbright Grant to work in Italy where, in a sixteenth-century farmhouse ten kilometers south of Florence, he began making bronze sculpture.

Upon his and Mary’s return to the United States, Howard connected with the Cordier and Ekstrom Gallery in New York City. From 1973 through 1986 Howard, with his dealer, Arne Ekstrom, produced seven one-man shows. With Cordier & Ekstrom and dealers Gail Feingarten of Los Angeles, and Grace Hokin of Palm Beach, Florida, Howard produced over two hundred bronzes, along with paintings and drawings. The results of that work can be seen at the Newmans, Ltd. website.

Also in 1973 and 1975, Mary and Howard gave birth to their children, Joshua and Rachel.

At the end of the 1980’s, Howard and Mary began their company, Newmans, Ltd., focusing on using Howard’s talents and fascination with solving unusual problems for the restoration of art objects including the complete metal contents of Touro Synagogue, America’s oldest Jewish house of worship, in Newport, Rhode Island, and the 22,000 foot gold wire sculpture, Trinity, by Richard Lippold at The Church of St. Gregory The Great, at Portsmouth Abbey and School in Portsmouth, Rhode Island.

The writing, photographs (not including imports from other sources which are noted where possible), videos and overall design of this website, the fine art site and the Newmans, Ltd. site is by Howard with the help of Mary and many wonderful assistants.

Howard and Mary live, work, and enjoy their children, grandchildren and friends in an 1840’s house in the center of Newport, Rhode Island.